Go and discover a natural, mineral, traditional and spiritual world. This route will give you a glimpse of the ancestral ice cream making and preserving technique, before revealing the capital of pilgrimage and amazing you with a gem of Gothic architecture.

You will cross the Sainte-Baume, a limestone massif towering at 3766 feet. It is a sanctuary of exceptional natural heritage, which is the longest and highest secondary mountain range in the region of Provence. On its northern side, the Sainte-Baume forest and its remarkable beech wood stretch out. It is the only remaining forest of those that covered Provence 100 years ago. The Grotte de Sainte Marie Madeleine, the capital of pilgrimage in the Middle Ages, hides in the cliffs. At the foot of the massif, the villages of Nans-les-Pins and Saint-Maxim-la-Sainte-Baume unveil their charms…

The route starts by going up through the Vallée du Gapeau towards the village of La Roquebrussanne, then towards Mazaugues: the first stage of our journey. After passing though the village, follow the signs for Plan d’Aups until you reach the Glacière Pivaut car park. (Dep. 95).

The most spectacular of the freezer rooms of the Sainte-Baume, this circular building stands at 75 feet tall and has a diameter of over 55 feet. It used to be used to store ice cream for the town of Toulon during the summer until 1789. Information panels guide visitors around the attraction.

A little history: From at least the 17th century, the Saint-Baume massif was home to an original activity: ice cream making. The water from the springs and streams was harnessed, channelled and frozen on patios or in low-walled basins. Then it was stored in freezer rooms, large wells of 30-65 feet dug into the rock. A quarter of their height rose above the surface, and they were covered with a roof of tiles resting on a layer of earth. In summer, the blocks were cut and transported overnight by cart. Restored in the 1990s, we can now admire the storage tower, the settling and freezing tanks, the service roads and the low supporting dry rock walls.

Continue on the D95 towards the village of Plan d’Aups. Just under two miles past the freezer room is one of the most significant pilgrimage sites in the western world.

Idea 2: A stroll through the heart of the forest.

Both renowned and protected for many centuries, the Sainte-Baune forest is exceptional thanks to the variety and quality of its plant species. Its beech, oak grove and Scots pine are remarkable. The flora and fauna are unique, as they come between the Mediterranean forest and the mid-mountain alpine forest. The view from the summit allows you to admire the striking contrast between the south- and north-facing slopes. 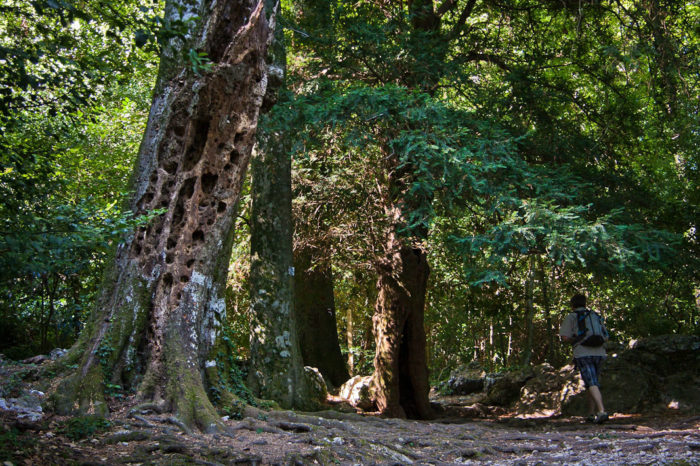 A cave deep in the Sainte-Baume mountain range, where Saint Marie Madeleine went to take refuge during her final years. After 40 minutes of climbing a winding path and a staircase surrounded by a life-sized scene of the crucifixion of Jesus, you will arrive at the cave’s esplanade in front of an exceptionally beautiful panoramic view.

A little history: According to legend, fourteen years after the Ascension and complete loyalty to her new faith, Madeleine left Bethany, chased by persecution. Upon reaching Marseilles, she preferred solitude and contemplation and followed the Huveaune river, climbing the hills of the spectacular Sainte-Baume massif. Right at the top of the massif, a unique north west-facing cave opens up, which means that only the most persistent rays of sun are able to enter. This is the delicate shelter where the saint took refuge. For thirty years, the recluse fed herself roots and quenched her thirst with rainwater. 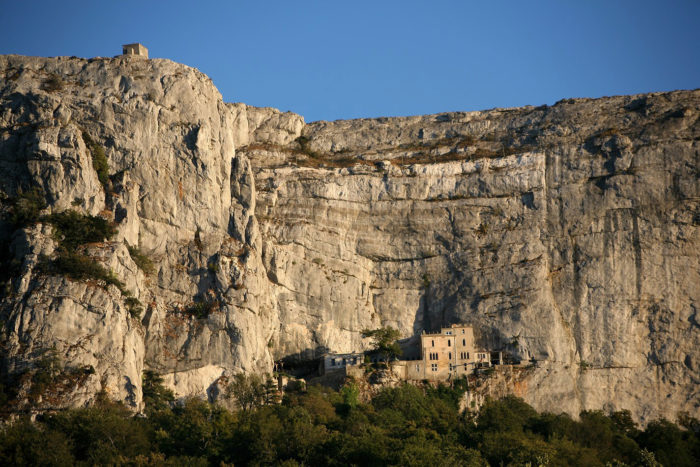 Take a step back into the real world before you follow the D.80 to Saint-Maxim-la-Sainte-Baume, passing through the village of Nans-les-Pins. Be careful: this road is very winding.

Idea 4 (for the more sporty among you) The Huveaune springs

After the descent, take the first road on the left towards the respiratory rehabilitation centre. The walk is two hours from the car park, with unclear signposting. If you prefer not to stop, continue your journey to reach the medieval city-state of Saint-Maxim-la-Sainte-Baume.

If you prefer not to stop, continue your journey to reach the medieval city-state of Saint-Maxim-la-Sainte-Baume. One of the most important basilicas in the south-east of France is enthroned in the centre of this little town. 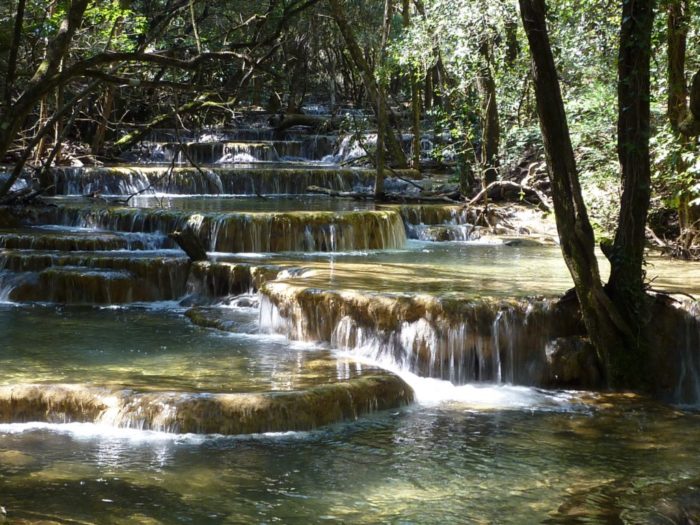 Idea 5: The Basilica and the royal monastery.

After several phases of construction, the monument was completed in the 15th century. This basilica, the biggest Gothic building in Provence, is always an extremely visited place. Mass, celebrations, pilgrimages, processions and even princely marriages (such as one of the Luxembourg princely family’s son’s in 2013) take place there. The monumental organs resound with all their might.

Joined to the basilica, the monastery and cloister form a rich architectural heritage. The garden, sacristy and chapter house also have exhibitions and traditional events. The Royal Monastery is now being used as a hotel.

At this point of the day, we propose that you start making your way back towards Solliès-Pont. That said, the route back lends itself to another couple of stops.

There’s a previously unseen museum at the heart of this little village.

A fun visit to the Gueules Rouges Museum tells the tale of bauxite mining in the Var.

A surprising site which is worth the detour. A free visit livened up by information panels.

A little history: In the 18th century, Count Omer de Valbelle built, with the help of the architect Vallon, a large dwelling on the ruins of a medieval castle that used to belong to Jeanne des Baux, the queen of Naples. The castle was extended and decorated progressively between 1765 and 1777.

The eastern face, in particular, was livened up by a colonnade by Tuscan order, and a park was created, destined to providing a framework for luxurious parties, where the all of the nobility from Provence reunited. This park, considered as one of the most beautiful parks in Provence in the 18th century, has today fallen into disuse, but it still has a great deal of dreamlike power thanks to the romanticism that its ruins release. It extended out on either side of the castle, between the trees on a hill. It was full of unusual plant varieties and brightened up by several statues (Venus, Mars…), factories (pyramid, pagoda, obelisk), stables, a windmill and a bird shop, of which few traces are left today. It may seem that disorder and randomness reigned. But the placement of factories and bushes was, in fact, down to rigorous geometry that can only be noticed by looking at a map.

During the French Revolution, the castle was seized as emigrant property. The furniture was scattered and the park devastated. A good number of the ornaments disappeared. Some were saved and can now be seen in museums. Others, such as the Pigne vase, now transformed into a fountain, have been placed in the village.

The ruins of the castle and park are listed as historic sites. 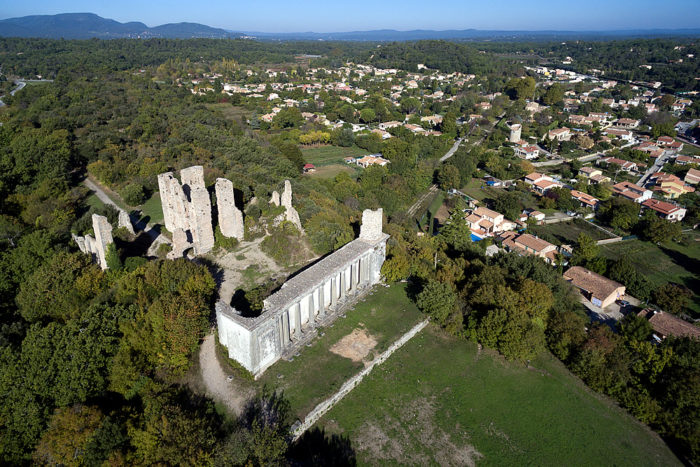